One of the least challenged claims of global warming science is that carbon dioxide in the atmosphere is a “well-mixed gas.” A new scientific analysis not only debunks this assertion but also shows that standard climatology calculations, applicable only to temperature changes of the minor gas, carbon dioxide were fraudulently applied to the entire atmosphere to inflate alleged global temperature rises.

Acceptance of the “well-mixed gas” concept is a key requirement for those who choose to believe in the so-called greenhouse gas effect. A rising group of skeptic scientists have put the “well-mixed gas” hypothesis under the microscope and shown it contradicts not only satellite data by also measurements obtained in standard laboratory experiments.

Canadian climate scientist, Dr Tim Ball is a veteran critic of the “junk science” of the International Panel on Climate Change (IPCC) and no stranger to controversy.

Ball is prominent among the “Slayers” group of skeptics and has been forthright in denouncing the IPCC claims; “I think a major false assumption is that CO2 is evenly distributed regardless of its function.“

Dr. Ball and his colleagues appear to be winning converts with their hard-nosed re-examination of the standard myths of climate science and this latest issue is probably one of the easiest for non-scientists to comprehend.

Indeed, even high school children are taught the basic fact that gravity causes objects heavier than air to fall to the ground. And that is precisely what CO2 is – this miniscule trace gas (just a very tiny 0.04% of atmosphere) is heavy and is soon down and out as shown by a simple school lab experiment.

Or, we can look at it another way to make these technical Physics relationships easy. This is because scientists refer to ratios based on common standards.  Rather than refer to unit volumes and masses, scientists use the concept of Specific Gravity (SG).  Giving standard air a value of 1.0 then the measured SG of CO2 is 1.5 (considerably heavier).  [1.]

CO2: The Heavy Gas that Heats then Cools Faster!

The same principle is applied to heat transfer, the Specific Heat (SH) of air is 1.0 and the SH of CO2 is 0.8 (heats and cools faster).  Combining these properties allows for thermal mixing. Heavy CO2 warms faster and rises, as in a hot air balloon.  It then rapidly cools and falls.

This ‘thermal’ mixing is aided by wind flow patterns, but the ratios of gases in the atmosphere are never static or uniform anywhere on Earth.  Without these properties CO2 would fill every low area to dangerously high levels.  Not ‘high’ in a toxic sense, only that CO2 would displace enough Oxygen that you could not have proper respiration.  Nitrogen is 78% of the atmosphere and totally non-toxic, but if you continue to increase Nitrogen and reduce Oxygen the mixture becomes ‘unbreathable.’

It is only if we buy into the IPCC’s “well mixed gas” fallacy that climate extremists can then proceed to dupe us further with their next claim; that this so-called “well mixed” CO2 then acts as a “blanket” to “trap” the heat our planet receives from the sun.

The cornerstone of the IPCC claims since 1988 is that “trapped” CO2 adds heat because it is a direct consequence of another dubious and unscientific mechanism they call “back radiation.” In no law of science will you have read of the term “back radiation.” It is a speculative and unphysical concept and is the biggest lie woven into the falsity of what is widely known as the greenhouse gas effect.

Professor Nasif Nahle, a recent addition to the Slayers team, has proven that application of standard gas equations reveal that, if it were real, any “trapping” effect of the IPCC’s “back radiation” could last not a moment longer than a miniscule five milliseconds – that’s quicker than the blink of an eye to all you non-scientists. [2.]

“Back radiation is a phrase, one that I don’t use myself, and it is not a word that is used in technical radiative transfer studies. Lets lose the back radiation terminology, we all agree on that.”

IPCC doomsayers claim it is under this “blanket” of CO2 (and other so-called greenhouse gases) that the energy absorbed by Earth’s surface from incoming sunlight gets trapped.

But one other important fact often glossed over is that CO2 comprises a tiny 0.4% of all the gases above our heads. Nasif Nahle reminds us that this is a crucial point when considering the claims of the “grandfather” of the greenhouse gas hypothesis (GHE), Svente Arrhenius.

Change in CO2 Temperature Is NOT Change in Atmospheric Temp

When applying the GHE formula devised by Arrhenius, IPCC scientists appear to have forgotten that we must consider the proportion of carbon dioxide in the atmosphere, not the proportion of the whole mixture of gases.

The trick of climate doomsayers is that they draw their conclusions obtained from the Arrhenius formula for CO2 (only 0.04% of atmosphere), then apply that change of temperature to the WHOLE Earth; this is bad science, or possibly fraud.

“No one seems to have realized that any purported increase in temperature of CO2 due to CO2 absorption is APPLIED TO CO2, not the whole danged atmosphere! Again, just a slight tweak in comprehending the reality makes a whole paradigm of difference.”

Professor Nahle and his colleagues insist that in addition to the above facts the proven varying density of atmospheric CO2 also needs to be taken into account to show how IPCC scientists are guilty of the greatest scientific swindle ever perpetrated.

From the NASA graph below (verify with link here) we can discern distinct and measurable regional variations in CO2 ppmv. So even NASA data itself further puts paid to the bizarre notion that this benign trace gas is “well-mixed” around the globe. 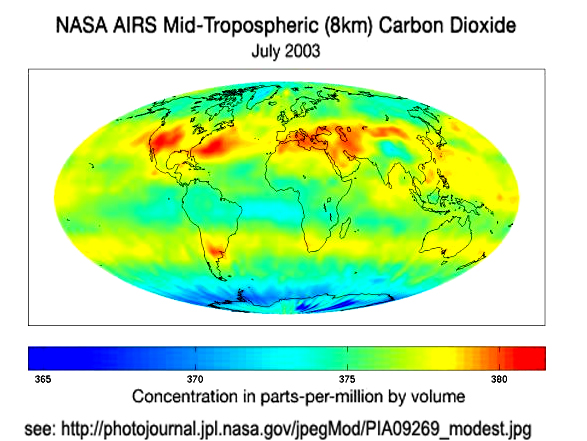 NASA’s diagram thus not only proves CO2 isn’t a well mixed gas but also demonstrates that there is no link between regions of highest CO2 concentration and areas of highest human industrial emissions.

Both Postma and Nahle have recently published groundbreaking papers discrediting the GHE. Professor Nahle analyzed the thermal properties of carbon dioxide, exclusively, and found that 0.3 °C would be the change of temperature of CO2, also exclusively, not of the whole atmosphere. Nasif pointedly observes:

“Such change of temperature would not affect in absolute the whole mixture of gas because of the thermal diffusivity of carbon dioxide.”

Additionally, Nahle and his Slaying the Sky Dragon compadres demonstrate that carbon dioxide loses the energy it absorbs almost instantaneously, so there is no place for any kind of storage of thermal energy by carbon dioxide. To the more technically minded what Nahle and his colleagues say is that the release of a quantum/wave, at a different wavelength and frequency, lasts the time an excited electron takes to get back to its base state.

Thus the IPCC’s CO2 “sky blanket” is shot full of holes as rational folk are increasingly abandoning the unphysical nonsense that carbon dioxide “traps” heat and raises global temperatures. Policymakers may be the last to wise up but they, too, must nonetheless consign the man-made global warming sham to the trash can marked “junk science.”

[1.] In our “current environment,” atmospheric nitrogen and oxygen vastly outweigh CO2. Nitrogen: 3,888,899 Gigatons; Oxygen: 1,191,608 Gigatons; Carbon Dioxide: 3,051 Gigatons. On a weight basis the specific heat of nitrogen and oxygen together is approximately 1 per kilogram, whereas CO2’s is about 0.844. Thus it’s clear that everyday air has a better ability to hold onto heat.

[2.] Professor Nahle, N., ‘Determination of Mean Free Path of Quantum/Waves and Total Emissivity of the Carbon Dioxide Considering the Molecular Cross Section’ (2011), Biology Cabinet, (Peer Reviewed by the Faculty of Physics of the University of Nuevo Leon, Mexico).